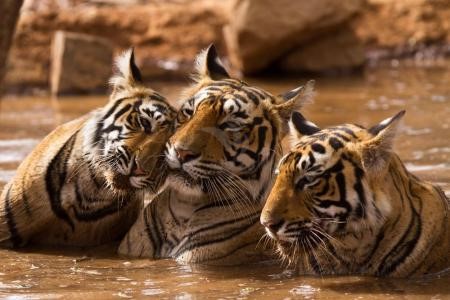 Ranthambore
Nearest Airport : Jaipur   Jaipur To Ranthambore : 146 Km
Getting to Ranthambore
Considered to be one of the biggest and most renowned National Parks in the country. Built by the Govt. of India in 1955 by the name of Sawai Madhopur Game Sanctuary, the park was declared as one of Project Tiger's reserves in 1973. Located at 130 km from the city of Jaipur in the Sawai Madhopur District in in south eastern Rajasthan, the park once served as the hunting ground for the Maharajas of Jaipur. Over the years the park has attracted numerous photographers and adventure buffs from around the world courtesy it's scenic landscape and rich flora and fauna. Apart from playing it's primary role of a Tiger reserve, the park is also home to 270 recorded species of birds. The avid Traveler's satisfaction is complete as the park's surrounded by Museums, Temples and Accommodations are made simple with the availability of star as well as budget hotels.
Read more
Why Visit ? (Things to see, Things to do, Food, Notes)
One of the country's most well-known Tiger Reserves ; The forest reserve was declared officially as a Project Tiger Reserve in 1973 ; Home to nearly 270 recorded species of birds ; Well known for it's traditional and organic art and craft exhibits ; Photographer's paradise as the reserve comprises of various scenic lakes and landscapes which serve as stand-alone scenic attractions.
Show more
Getting to Ranthambore
+ More

Kachida Park: Located along the outskirts of the park the region comprises of low hills and is known to be home to Panthers which refuse to venture into the reserve due to fear of tigers.

Lakarda Anantpura: Located along the northern and north-western boundary of the reserve this region is home to Sloth Bears and numerous ant hills which are a favorite for the bears.

Padam Taloo: One of the largest lakes in the park, the lake serves as home to the splendid Jogi Mahal which sets at it's very edge. Numerous animals swarm the lake during dawn and just before dusk. During their season, large numbers of Water Lilies have also been known to bloom.

Ranthambore Fort: Built by the Chauhans during the 8th Century, the fort is situated on the Thambore Hill at an altitude of 481 m(1578 ft). A lot of the Sawai Madhopur District's history revolves around the fort. It has been widely known to be a paradise for Trekkers and Photographers.

Jungle Safari: With Jeep and Canter Safaris ready to give travelers an amazing experience ,the jungle safari has become priority one for travelers post touchdown at Ranthambore

Bird Watching: Bearing the reputation of a well known Tiger Reserve ,the park is also home to a recorded 270 species of Birds. Ornithology enthusiasts have a field day here with dozens spending entire days watching birds, studying their patterns with some claiming to have seen 100-150 species in a singles day.

Village Trip: The Sawai Madhopur district is home to many villages where the villagers are segregated into communities based on their professions. The villages attract a lot of art lovers as the houses' mud walls are decorated with fine carvings mostly of animals and fables as the district itself packs a rich amount of significance to the country.

Every traveler's paradise comes with the promise of satisfying foodies and gourmets who believe in the idea of fine dining to top amazing adventures. Ranthambore brings in some of the most exquisite cuisines of Northern India along with a wide array of Continental delights.

At The Sher Bagh, travelers can enjoy international cuisine and delights along with fine brew by the camp fire to add more to the idea of a true retreat.

The Ranthambore Forest Resort provides a regal ambiance to travelers with international and Indian cuisine accompanied by a fine range of beverages.

The most well known is the Choki Dhani Restaurant which serves traditional Rajasthani Cuisine and the restaurant itself is styled like a typical Rajasthani village.

Plenty of Dhabas can be found around the park which serve decent food at reasonable rates.

Ranthambore serves as an Art & Craft lover's paradise with numerous art and craft houses serving as exhibits for shopping.

The Craft House serves as a center for traditional Rajasthani handicrafts.

The Ranthambore School of Art is ideal for Organic Art lovers with daily art exhibits.

Climate : Summers are considered to be blazing hot and travelers are advised to carry and wear only light clothing with hats and sunglasses. Winters are characterized by biting-cold mornings around the region while nights get chilly with mufflers and gloves becoming a necessity.

Trivia : Ranthambore got it's name courtesy of it's location right in between two hills : Rann and Thambore.