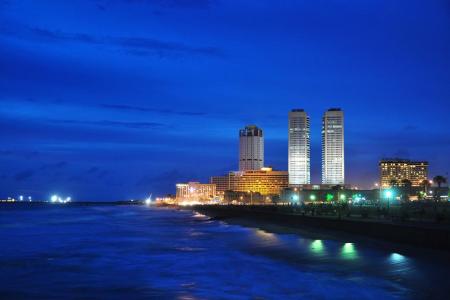 Colombo
Nearest Airport : Colombo
Getting to Colombo
Situated on the west coast, Colombo is a major metropolitan city of the isle of Sri Lanka and also the busiest and most populated. A beautiful city with a breathtaking concoction of ancient as well as modern-day architecture, Colombo is one of the most beautiful places to visit not only in the country but also in the sub-continent. Having an amazing collection of monasteries, temples, museums as well as natural retreats, Colombo is definitely a place to have on your bucket list.
Read more
Why Visit ? (Things to see, Things to do, Food, Notes)
Known to have some of the best beach resorts in the sub-continent; Amazing colonial architecture and world renowned centre for Buddhism; Commercial and financial capital of Sri Lanka; Known to have some of the best restaurants in the sub-continent; Fantastic collection of Museums, Zoo parks and art galleries; A major cultural hub of the island as well as the sub-continent
Show more
Getting to Colombo
+ More

Retrace Lord Rama's steps in Lanka after defeating the then-king Ravana in the Great War in this tour inspired by The Ramayana. You will visit the significant places where some major and minor events from the Ramayana have happened. This package also makes sure that you do not miss some of the most important attractions around the popular cities of Kandy, Nuwara Eliya and Colombo.

Read More
The Ramayana Excursion
5 Nights - 6 Days
Colombo Kandy Nuwara Eliya Ella
Book Now
An ideal short-break package for folks who are interested in the history and culture of the country. This package takes you through the historical capital Kandy, with its heritage sites, the quaint hill station of Nuwara Eliya which is the epitome of the British colonial times and finally to the modern-era Colombo which is the commercial and financial capital. If you would like to have a taste of the country, but also looking for a quick escape on a long weekend, this might just be what you are looking for.
Read More
Experience Ceylon
3 Nights - 4 Days
Colombo Kandy Nuwara Eliya
Book Now

Wish for some sun, sea and sand, away from the dreary routine? This package might be what you would be looking for. Ideal for a short break over a long weekend, yet packing in most of your holiday-requirements, this tropical holiday in Sri Lanka's popular coastal cities over 4-5 days is a great beach holiday that will leave you refreshed at the end of it.

Read More
Sri Lankan Coastal Circuit
4 Nights - 5 Days
Colombo Galle Bentota
Book Now
Experience the major cultural centres of Sri Lanka at a slower pace - befitting a 'getaway' from the hectic routine of a busy life. In this package, you will explore the historically significant Kandy, with a break on the beach at Bentota before proceeding to the vibrancy of the modern capital Colombo.
Read More
Classics of Sri Lanka
3 Nights-4 Days
Colombo Kandy Bentota
Book Now

Explore Activities
Why Visit ?
The Natural History Museum : A museum that houses articles, artifacts as well as exhibits that educate visiting travelers and tourists about the island's floral and faunal history and the various species known to have thrived here.
The National Museum of Colombo : This is the largest museum in Colombo. Details the island's history and houses some of the artifacts and souvenirs of the Kandyan empire. One of the most popular places in the country.
The Dutch Period Museum : Details the history of the island while it was under the Dutch rule. Houses some of the historic souvenirs and artifacts from the Dutch period.
Colombo Zoological Gardens : One of the highly frequented tourist attractions. The zoo houses many animals, reptiles and birds from around the world.  The zoo hosts an Elephant show, and offers elephant rides as well as pony rides.
Casa Serena Art Gallery : An art gallery in Colombo, known for housing traditional and modern art, from different artists across the world. Also exhibits sculptures and crafts of various kinds.
Turtle Conservation Villa : A wonderful, interactive and engaging initiative aimed at educating visiting travelers about the conservation of turtles.
Cricket Club Cafe :  Named after the legendary Don Bradman, the cafe is just the place to be for cricket lovers, what with their cricket poster laden interiors, souvenirs and collectibles, which are accompanied by huge TV screens showing highlights from some of the good old matches. Serves excellent Australian cuisine along with a fine menu of beverages.
The Lagoon : A restaurant serving authentic Sri Lankan cuisine, particularly seafood.
Ginza Hohsen : A fantastic Japanese restaurant which is as real as it gets. The restaurant is complete with Tatami rooms as well as a Sushi Bar and gives you the most real Japanese dining experience.
The London Grill : A classical British restaurant which serves some really amazing notable delicacies from the British isles along with a fine menu of beverages.
Majestic City:  A shopping mall in the city, known for housing a variety of clothing outlets as well as electronics, books and kids' shopping sections.
Liberty Plaza: Similar to Majestic City, this mall has a good collection of stores that deal in clothes, electronics and books.
Barefoot: The best place to go if you are looking for souvenirs, antiques and collectibles.
Language: Sinhalese, Tamil and English
Climate: Known to have a temperate climate through the year. With summers known for being warm and slightly humid and winters known for being relatively cool and pleasant. The city is known for a good amount of rainfall during it's monsoon
Currency: Sri Lankan Rupee
Trivia: Colombo was known as a major world commercial hub for over 2000 years among world traders
Images of Colombo & around
Region More Image x
2000+Handpicked getaways
300+ Holiday Destinations
1000+Group Outings
In the
News