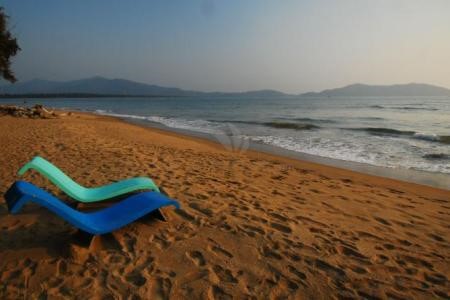 Karwar
Nearest Airport : Goa   Goa To Karwar : 87 Km
Getting to Karwar
Karwar, once a Naval Base, is famous for its beaches, the Sadashivgad Fort, as well as its maritime museum. Renowned poet Rabindranath Tagore dedicated a chapter of his memoirs to this beach town. An important stop on a tour of coastal Karnataka, Karwar is also close to Sirsi, a place of great religious importance, home to the Sahasralinga.
Seafood is popular, and mostly flavored in coconut.
Read more
Why Visit ? (Things to see, Things to do, Food, Notes)
Tagore Beach;Time to visit: October to February;Fort Sadashivgad;Maritime Museum;Adventure sports;Sahasralinga in Sirsi;Taste the traditional Kurle Ambat
Show more
Getting to Karwar
+ More

Why Visit ?
Sirsi: Sirsi is famous for the Sahasralinga, around 1000 carvings of Shivalingas in the river shalmala. Popular among Shiva worshipers, there is also a carving of Nandi facing each Linga. Sirsi is also well known for its pineapples all over India. Boasting export quality Pineapples, each slice could be almost as big as your face. Roughly 150kms away from Karwar, make sure you make a day trip of Sirsi!

Maritime Museum: Once a Naval Base, Karwar is known for its naval connections. In 2006, a decommissioned warship was converted into a museum, being the third of its kind in the entire country.

Tagore Beach: Named after Nobel Laureate Rabindranath Tagore, this beach was formerly named Karwar beach. Tagore dedicated a chapter of his memoirs to Karwar, when he visited his brother at the age of 22. The sun kissed sands attract tourists to cool off.
Anshi National Park: Barely 60kms from Karwar, Anshi national park offers a diversity of flora and fauna, which can be seen on a nature walk or a safari! Spot Bengal tigers, black panthers and Indian elephants on your journey through the park.
Timings: 6am to 6pm

Thrillophilia Tours: Adventure sport on their every breath, Thrillophilia tours offer tours involving water sports in Karwar. An overnight tour will involve camping, an island tour as well as a meeting with dolphins. Starting at Rs.3000, Thrillophilia is ready to customize your tour!
Seafood is a favorite here, mostly cooked in a coconut, chilly and tamarind flavor.
Images of Karwar & around
Region More Image x
2000+Handpicked getaways
300+ Holiday Destinations
1000+Group Outings
In the
News