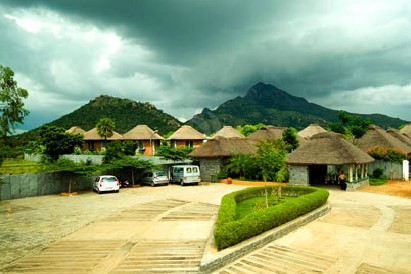 Thiruvannamalai
Nearest Airport : Chennai   Chennai To Thiruvannamalai : 207 Km
Getting to Thiruvannamalai
Built around the Annamalaiyar Temple, Tiruvannamalai is one of the famous temple towns of Tamil Nadu and one of the most popular in South India. The town is nestled beautifully at the foothills of the Annamalai hills and is also known to be one of the country's most visited spiritual attractions. Known for festivals, most famous of which is the Karthigai Deepam which is celebrated every year. Apart from temples, the town is also well known for it's restaurants and shopping.
Read more
Why Visit ? (Things to see, Things to do, Food, Notes)
Town is built around the famous Annamalaiyar Temple ; Karthigai Deepam festival witnessed by close to three million pilgrims ; A top attraction for the spiritually-minded ; One of South India's five elemental cities ; Good number of ashrams and other spiritual centres
Show more
Getting to Thiruvannamalai
+ More

Arunachaleshwar Temple: One of the largest temples in India and one of the most well known in the country. The temple is characterised by four huge Gopurams which mark the entrances to the temples as well as five more Gopurams inside the temple with a large number of sub-temples and shrines.

Mount Arunachala: The 800m high extinct Volcano overlooking Thiruvannamalai is visited by devotees every year who walk the 14km long route all the way while stopping along 8 Lingas which are situated along the route.

The town is also home to some very famous ashrams, the most well known of which include:

Shanti Cafe : A fine restaurant which serves a wonderful menu of baked delights like Cakes, Pizza and Burgers along with some fine beverages.

Satvam, Sparsa Resort: Located at Sparsa resort, this is a wonderful vegetarian restaurant which serves traditional South Indian as well as North Indian cuisine.
Most of the shopping here is done in and around the temple's busy market place where you can shop for religious souvenirs, collectibles, CDs and tapes with recorded Chants as well as wall posters and religious clothing. The town is also known for it's textile industry. Some of the well known shopping centres in town include:

Climate: The town is well known for it's hot and humid climate particularly during the summers with heavy rains during monsoon and relatively cooler conditions during the winter.