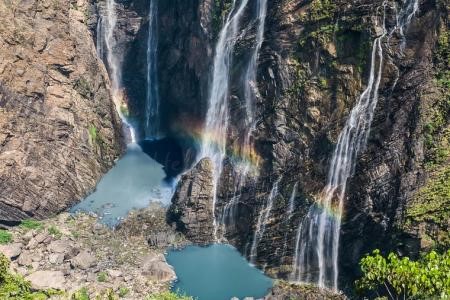 Shimoga
Nearest Airport : Mangalore   Mangalore To Shimoga : 193 Km
Getting to Shimoga
A gateway to the treasures of the Western Ghats, Shimoga is mostly visited as a stopover town. There are, nevertheless, a variety of fun things to see and do in the nearby towns and cities. Known as the Gateway of Malnad, Shimoga offers both Malnad and Udupi cuisine. An elephant friendly town, you might just catch an elephant signing for joy. Shimoga is now a bustling city, peeking at development.
Read more
Why Visit ? (Things to see, Things to do, Food, Notes)
Also called "The Gateway of Malnad";Time to visit: July to January;Go hiking or take a trip to a nearby temple;Lion and Tiger Safari at Sagar;Udupi cuisine
Show more
Getting to Shimoga
+ More

Why Visit ?
Jog Falls: About 101 kms from Shimoga, this is the highest waterfall in India. During the monsoon season, 4 jets of water playfully named Raja, Rani, Rocket, and Roarer gush in full strength. It takes the better part of 2 hours to trek up the hill to Jog Falls.

Shivappa Nayak Palace: Situated on the banks of river Tunga in the busy lanes of Shimoga city. A 16th century palace, showcasing artifacts built with rose wood. The palace has a museum which has several interesting and rare archaeological collections, including stone carvings and antiques of the Keladi period. Recovered idols of Hoysala and Chalukya period from the early 16th century to late 18th century are also displayed here.

Guduvi Bird Sanctuary: This is the only bird sanctuary located in the midst of a dense forest. As per a 1993 survey, there are 191 varieties of birds here. A natural lake and an expanse of trees provide shelter for these birds.  Some important birds found here are White Pebis, Stone Bill, Egret, Cormorant, Snake bird, Heron and others.
Lion and Tiger Safari: Around 12 Km from the Shimoga bus terminus. Not a safari in the true sense of the word because the lions and tigers are housed in fenced enclosures and a sighting is guaranteed. The park also has a mini zoo housing hyenas, bears, porcupines, pythons, and alligators.
Fees: Rs.50 per head for Indians. Rs.400 per head for foreigners.

Elephant Training Camp: 14 kms away from the city you can hear elephants reciting their lessons. These elephants sing! Also, a couple of them play guitar and drums. They call them "Tusks and Roses". Many elephants here are tamed by professionals, for log lifting and other such work. Elephants from the adjoining forests bathe at this spot, before they re-enter their forest abode. To catch a glimpse of these mammoths at play in the waters, get there before 9 a.m.

Honnemaradu: A small town alongside a reservoir, tucked away in the lush greenery of the Western Ghats along the Sharavati backwaters near Sagar. Honnemaradu or ?Golden Lake? has some of the most spectacular views of the sunrise and sunset. Some of the water sports activities here include canoeing, kayaking and wind rafting.

Offering both Udupi and Malnad cuisines, the restaurants of Shimoga have a variety of dishes to choose from.
Try the Akki roti, famous to the region, as well as genesale and thotadevvu, popular sweets and local favourites!
Images of Shimoga & around
Region More Image x
2000+Handpicked getaways
300+ Holiday Destinations
1000+Group Outings
In the
News