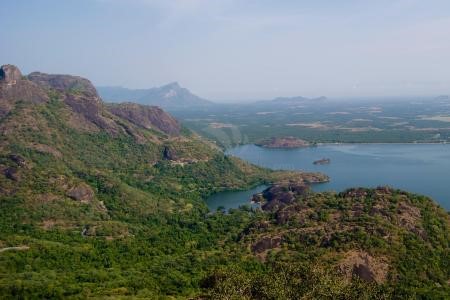 Pollachi
Nearest Airport : Coimbatore   Coimbatore To Pollachi : 44 Km
Getting to Pollachi
Pollachi is second only to Coimbatore in terms of size. With a number of activities to do in and around Pollachi, you will never find yourself bored in this Tamil Nadu town. Lying very close to a number of wildlife sanctuaries and waterfalls, this place offers safaris and trekking and picnic opportunities. The temples of the region are also famous and doused in folklore and legend. Pollachi makes for an interesting place to visit, especially with the option of spending the nights in a treehouse!
Read more
Why Visit ? (Things to see, Things to do, Food, Notes)
Pollachi is considered South India's biggest cattle market.; Time to visit: December to February; Trek at Valaparai; Waterfalls and temples dot the region; Enjoy a typical Tamil Sapad (meal); Pick up local handicrafts as souvenirs.
Show more
Getting to Pollachi
+ More

Why Visit ?
Masani Amman Temple: The temple is roughly 16kms away from Pollachi, and has Goddess Masaniamman as its deity. The statue of the deity, lying on her back measures 15 feet. The legends surrounding this temple are fascinating and make for a good story to listen to on a visit.
Timings: 6am to 8pm
Monkey Falls: Natural waterfalls that cascade beautifully down the rocky mountainside. Monkey falls is on the way from Pollachi to Valparai. Be sure to stop and take a picture at this elegant waterfall!
Valparai: A hill station roughly 65kms away from Pollachi, Valparai is sheathed in tea and coffee plantations. The drive from Pollachi to Valparai passes through the Indira Gandhi Wildlife Sanctuary, as well as Aliyar Dam and a few waterfalls.
Aliyar Dam: With various activities surrounding the region, such as boating, living in a treehouse or even relaxing in a park, Aliyar Dam has it all. It even has a mini theme park maintained by the Tamil Nadu Fisheries Corporation. A popular tourist destination.
Timing: 9am to 6pm
Temple of Consciousness: Stay overnight or take a shorter course at the temple of consciousness, roughly 25kms from Pollachi. Meditation, introspection and other courses start at Rs.100 per person. Tap into your spiritual side at this center for learning.
Timings: 7am to 1pm; 3.30pm to 7pm
Parambikulam Wildlife Sanctuary: Take a safari at this wildlife sanctuary, roughly 55kms from Pollachi. Declared as a Tiger Reserve in 2009, the Parambikulam Tiger Reserve is one of the most protected areas in the Western Ghats. Choose from various trekking options, safaris, and nature education camps.
With Tamil as the prevalent cuisine in Pollachi, you can be sure to find well spiced lentils and rice as the staple diet here. Flavorsome preparations are sure to excite those taste buds. Try the Tamil Sapad, served on a Banana Leaf.
Try Anandbhavan Hotel or Shakti Hotel for the authentic taste of Tamil Nadu.
Buy local handicrafts at shops near the Dams.
The Jaggery Market here is Asias largest Jaggery Market.
Languages spoken: Tamil, Malayalam, English
Currency: Indian Rupee
Climate: Its location gives Pollachi a climatic edge. Enjoying pleasant climate throughout the year, Pollachi is best visited between December and February. Connectivity: A bustling city, Pollachi has good mobile connectivity. Trivia: Pollachi is the second largest town in the district after Coimbatore.
Images of Pollachi & around
Region More Image x
2000+Handpicked getaways
300+ Holiday Destinations
1000+Group Outings
In the
News