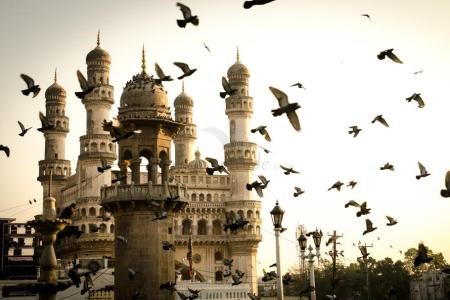 Hyderabad
Nearest Airport : Hyderabad
Getting to Hyderabad
Fondly known as the "City of Pearls" and one of India's most populated metros, Hyderabad is one among the several other metros which put India on the map of world tourism. A living, breathing city located on the banks of the Deccan Plateau's Musi River, which is world famous for it's rich history, culture and of course, cuisine. One of those cities which you simply can't get enough of, Hyderabad keeps delivering consistently when it comes to tourism. Hyderabad and it's twin city Secunderabad, which has more of a modern outlook, have over the years combined and transformed into a super metropolis.
Read more
Why Visit ? (Things to see, Things to do, Food, Notes)
One of India's Princely states during British Rule ; Home to the Nizam dynasty of India ; One of India's most prominent national monuments Charminar is located here ; Base of India's second largest film industry ; Distinctive and internationally famous cuisine ; Bustling and popular Bazaars ; Well known Qutab Shahi Tombs and Mecca Majid ; Well known Buddha Statue located right in the middle of the Hussain Sagar lake
Show more
Getting to Hyderabad
+ More

Some of the most well known and internationally popular spots in the city which rank among it's most visited and need no introduction or description include:

Heritage Walk : Knowledge Tour for people of all ages conducted by the Tourism Board every Sunday.

NTR Gardens: One of the city's amusement parks for kids and also a getaway for people of all ages. Full of toy train rides, kid's mini rides, open air shows and concerts etc.

Lumbini Park: The city's lakeside amusement park which is known for it's Water Cascades show and it's boat rides in the Hussain Sagar lake all the way to the Buddha Statue.

Ramoji Film City: Guinness Record Holder for being the largest film studio complex in the world. Serving as the city's main filming zone and also as an amusement park for kids. Visitors can tour the filming sets while also enjoying the park's picturesque spots. Ideal for Romantic as well as family getaways.

Well known for it's distinctive cuisine such as the world famous Hyderabadi Dum Biryani ,Kebabs, Haleem , Double Ka meetha , Falooda, Irani Chai and more! Some of the city's internationally famous and acclaimed restaurants where you can find the above include the following:

Paradise Resturant, Secunderabad : A well known symbol of Hyderabad's culinary excellence, this restaurant attracts tourists, travelers, celebrities and other notable people from across the country and the world who swarm the place for the acclaimed Paradise Dum Biryani.

Karachi Bakery: When you tell somebody that you are going to Hyderabad, they will ask you to come back with a pack of fruit biscuits from this place. One of the city's oldest and most well known bakeries known for it's distinctive delicacies and baked delights.

Pista House: If you want to try the Hyderabadi Haleem , then this is the place to hit. The Haleem here has gained such levels of popularity that it set records for being shipped to the gulf as well as to other cities across India. Apart from Haleem ,the shop's also known as one of the best stand-alone Sweet & Dessert houses in the city.

Cafe Bahar: Another famous Biryani and Kebab joint which runs a packed house through the year and is one of the most well known in the city.

The city's most well known form of shopping is of products such as wholesale clothing, budget clothing, pearls as well as ladies' retail and glass bangles. Some of the most famous Bazaars in the city include:

Climate: The city's known for it's blazing hot summers with monsoons bringing in heavy rainfall during the period of June to September . Winters are known to be biting cold in the mornings and nights.

Trivia: Hyderabad is the city where the Kohinoor Diamond was actually mined. It was mined in one of the city's areas called Dilsukh Nagar and was then stored in a vault at Golconda Fort.
Images of Hyderabad & around
Region More Image x
2000+Handpicked getaways
300+ Holiday Destinations
1000+Group Outings
In the
News