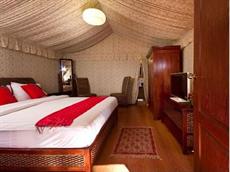 Beyond hectic schedules and robotic routines there is a world where time stands still and life is all about rediscovering intimacy with all the five senses or celebrating with a special someone. The Fern Creek is at the heart of picturesque Kodaikanal on the Palani hills in South India. Miles away from the dust, grime and noise of urban living. It is a magical, romantic getaway tucked away in an oasis of lush greenery.

Untouched and raw, the ambience is comfortable and refreshing filled with the aroma of eucalyptus, lilies and pines. Designed for utmost privacy, the 7 swiss luxury tents are spread across 1.5 acres and have in room amenities equivalent to a 5 star resort. The property as a whole has plenty to offer to meet your expectations/moods; even more, the all inclusive packages will save you the effort of tying up the loose ends of a holiday.
For the incurably romantic, or the terribly laid back or even the complete workaholic who needs a reason to celebrate  The Fern Creek offers something for each and everyone. The Fern Creek is a holiday waiting to be discovered.
Facilities
Services
Laundry service
See More
Accommodation

Our first of this kind in Tamilnadu, Swiss Luxury Tents have been designed based on three core elements of luxury, privacy & intimacy. The exclusive water hyacinth and teak furniture from the exotic East have been individually customised to suit your expectations. Be it the 8 inch Restonic mattress from America or luxurious bathroom fittings from Grohe/Kohler or the awesome fire places from China, or the bathroom linen from Richard Haworth or any of the other products or services you may use during your stay have been designed to make your holiday truly memorable.

There are number of facilities offered by The Fern Creek

Coaker's Walk, 500 metres from the bus-stand, constructed by Lt.Coaker in 1872, is a 1-kilometre paved pedestrian path running along the edge of steep slopes on the southern side of Kodai. The walk, running parallel to the Van Allen Hospital Road provides stunning panoramic views of the plains. A fascinating rare phenomenon called Brocken spectre can be witnessed, when a person can see his shadow on the clouds with a rainbow halo. This occurs when the sun is behind the viewer and clouds and mist are to the front. There is an observatory with a telescope halfway along the walk. Entrance fee to the walkway is nominal and it is open all year.

Bear Shola Falls, 3 kilometres from the bus-stand, is a tall waterfall in a Reserve forest. The final approach to this quiet area is a gently climbing foot-path.
Green Valley View, 5.5 kilometres from the bus-stand and near the golf course, has an excellent panoramic view of the plains and a sheer drop of 1,500 metres overlooking the Vaigai Dam to the south.
Pine forests: In 1906, with a view to growing valuable timber, Mr. Bryant started the Kodaikanal pine plantations in the south-west of Kodaikanal. The forest area remains virgin and the large stream running through is a stunning sight.
Shembaganur Museum of Natural History, 6 kilometres from the bus-stand, founded in 1895, is open to the public for viewing their outstanding taxidermy collection of more than 500 species of animals, birds and insects and a living collection of over 300 exotic orchid species.
Kodaikanal Solar Observatory 6 kilometres from the bus-stand on Observatory Road, at 2,343 metres is the highest location near Kodai. The first observations were commenced here in 1901. The Kodaikanal Terrestrial Telescope can view a grand panorama including: Sothupparai Dam, Vaigai Dam, Periyakulam and Varaha river. This Indian Institute of Astrophysics facility has a comprehensive Astronomical Science museum with organized public tours, access to the astronomy library, and scheduled night-time telescopic sky viewing. It is open daily to the public during peak season, and a few hours each Friday the rest of the year.
Pillar Rocks, 8 kilometres from the bus-stand, is a set of three giant rock pillars which stand 122 metres high Managed by the Tamil Nadu Forest Department, The viewpoint can be crowded but is not commercialized. There is an excellent public garden adjacent to the viewpoint.
Devils kitchen, are deep bat-infested chambers between the three gigantic boulders that are the Pillar Rocks. The deep narrow ravines of the caves are now closed to. These dangerous caves are highly protected now, and tourists can see sections of the cave system from afar.
Silver Cascade, 8 kilometres from Kodaikanal at a wide bend in the long and winding Laws Ghat Road, at altitude 1,800 metres, is a 55-metre waterfall formed from the outflow of Kodaikanal Lake.There is also a smaller but more serene waterfall below the bridge which crosses the stream here.
Dolphin's Nose, 8 kilometresfrom the bus stand, is flat rock projecting over a breathtaking chasm 6,600 metres deep. It is an undisturbed area 1 kilometre down a very steep rocky trail beginning soon after Pambar Bridge. Orange juice vendors along the trail offer a welcome rest stop. Beautiful views of steep rocky escarpments rising from the plains can be seen.
Kurinji Andavar Murugan temple, 4 kilometres from the bus-stand, is famous for its Kurinji flower which blossoms in the area only once every 12 years. The deity here is called Sri Kurinji Easwaran, who is in fact Lord Murugan. This temple was built in 1936 by a European lady, who on coming to India, converted to Hinduism.
Getting there
Almost all distances from Kodaikanal are calculated with the lake as the central point of reference.
Location Details
Getting to Kodaikanal 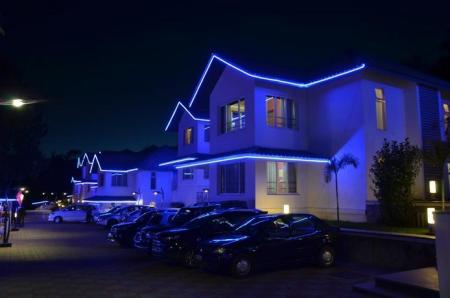 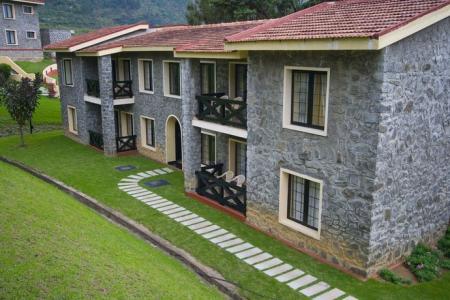