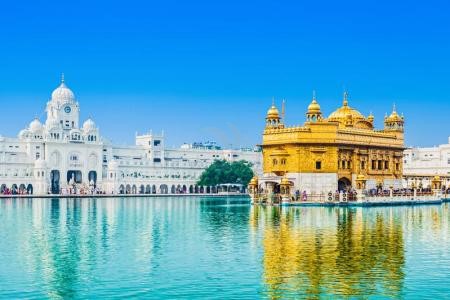 Amritsar
Nearest Airport : Amritsar
Getting to Amritsar
One of the most historically valuable cities to the country. Apart from being home to the world famous Golden Temple , the city is also known to be a rich cultural hub for Sikhs and people for other religions as well. Despite being marred by a few ghastly incidents such as the 1919 massacre and Operation Blue Star of 1984 , the city manages to attract people from across the country and the world to this day by maintaining it's religious and cultural flag symbols in pristine condition to this day.
Read more
Why Visit ? (Things to see, Things to do, Food, Notes)
Religious and Spiritual capital for Sikhs ; Home to the Golden Temple ; Base of the Sikh Parliament ; More visitors than the Taj Mahal ; Most popular Indian destination for NRIs ; Site of the Jallianwala Bagh Massacre of 1919 ; Known for it's textiles and traditional handicrafts industry ; Maharaja Ranjit Singh's famous Ram Bagh Gardens
Show more
Getting to Amritsar
+ More

The Golden Temple : The main attraction in the city and the most important religious place for the Sikhs. A stunning complex full of thousands of pilgrims from all over India, the excitement here is palpable and infectious .

Jallianwala Bagh : The place is a short 5-minute walk from the Golden Temple and known for being the site of the 1919 massacre. On April 13 of that year, British Indian Army soldiers opened fire on an unarmed huge gathering of men, women and children. A memorial was built on the site and inaugurated by the then-President of India, Dr. Rajendra Prasad, on 13 April 1961. The bullet holes can be seen on the walls and adjacent buildings to this day.

Central Sikh Museum : A must-see for anybody visiting the golden temple , the temple's rich history is reflected in the museum through the wonderful paintings , murals and other artwork which are housed in the museum.

My Kind of Place: T his serves primarily as a fast food giant serving Pizzas , Burgers and other bakery products . The restaurant serves Chinese and Continental food as well.

New Punjabi Rasoi: Located around the corner of the temple this is one of the most popular restaurants in the city and serves amazing North Indian as well as South Indian cuisine.

Neelam's: This is place is just a few yards away from New Punjabi Rasoi. The place is known to serve deliciously bakes delights as well as meals.
In and around the Temple area as well as in the city's numerous busy market places you can shop for:

Religious CDs and Tapes which contain recordings of religious chants

Climate: Like most Northwestern cities , Amritsar is known to have a semi-arid climate with summers being extremely hot and winters being bitter cold with temperatures reaching below freezing point on a few occasions . The city receives it's fair share of rainfall with a monsoon and post-monsoon season

Trivia: The city served as one of the centres of the Sikh empire early in the 19th century
Images of Amritsar & around
Region More Image x
2000+Handpicked getaways
300+ Holiday Destinations
1000+Group Outings
In the
News