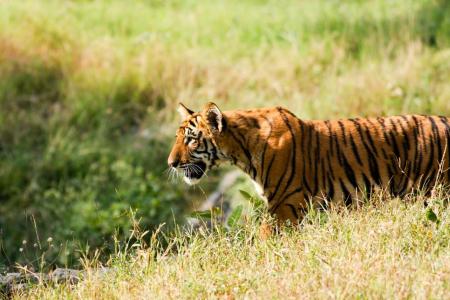 Corbett
Nearest Airport : Dehradun   Dehradun To Corbett : 218 Km
Getting to Corbett
A park that needs no introduction. A reserve rich with history and an unparalleled level of guaranteed thrills and amusement, drawing adventure buffs from around the world for over 6 decades. The park was first established as "Hailey National Park" during the year 1936 in Nainital, Uttarakhand with the aim of protecting the endangered Bengal Tiger. The park was later named after Legendary hunter turned conservationist, author and naturalist Jim Corbett.
Read more
Why Visit ? (Things to see, Things to do, Food, Notes)
The first ever national park to be set up in India ; Started off as a Tiger reserve to protect the endangered Bengal Tiger ; Close to 75 percent of the park is covered in dense forests and grasslands ; Houses close to 120 species of trees,50 species of mammals,600 species of birds and 30 species of reptiles ; Known for it's Jeep Safaris and Elephant Safaris which are usually available in the wee hours of the morning and during afternoon ; Also known for it's species of reptile ; Some of the well known reptiles found here include the very rarely seen Marsh Crocodile, Gharial and the well known Monitor Lizard ; Covers an area of 520.82 sq km ; Park also houses the well known Corbett House and Corbett Museum ; Point of inception for Project Tiger in 1973 ; Activities like Rappelling, Cave Diving, Rock Climbing are available for tourists.
Show more
Getting to Corbett
+ More

Where to Stay in Corbett

Corbett National Park is one of India's most beautiful and visited holiday destinations. Whether you are a hardcore nature enthusiast or just a family looking for a serene and simple outing, Corbett is for you. It has been known to house the Bengal Tiger and the Asiatic Elephant and is also known to hold close to 600 species of Avifauna. The park has earned the reputation of being the most famous in India and is visited by an estimated 80-90,000 tourists every year and people who visit take the safaris in the park never seem to get enough and keep coming back to get those thrills again.
These are a few locations/zones you can look into and consider booking your stay at when you visit:
1) Ramnagar:
Ramnagar is the easiest town to access around the national park as it is well-connected by train from cities such as Delhi. You can also get here by getting on a plane to Pantnagar airport and renting a cab from there. There are several places located near Ramnagar that are visited by several tourists all around the world. Some of them are Garjia temple, Corbett museum, Dhikala, Birjani, Durga Mandir temple, and others.
2) Dhikala:
Located near the Patil Dun Valley, Dhikala is the most popular town among tourists and is located in Ramnagar. Travelers can enjoy sweeping views of the valley from the watchtower or simply by taking a relaxing stroll. However, this area is closed during the monsoon season (June - November), during which it is advisable to book your stay in the buffer zones of Jhirna and Sitabani.
3) Bijrani:
After Dhikala, the Bijrani zone is the best area to spot the tiger and several other species including leopards, black bears and wild elephants. The entrance to this zone is from the Aamdanda Gate and nearby accommodation options are mainly situated in Dhikuli. Keep in mind, however, this zone remains closed during monsoons as well.
4) Jhirna:
The Jhirna zone of the national park remains open in all seasons and thus receives footfalls throughout the year. It is situated at the southern edge of Jim Corbett and can be accessed from the Dhela Gate entrance. Jhirna is popular among bird-watching enthusiasts and wildlife lovers looking for exhilarating safari rides.
5) Sitabani:
Open all year round, Sitabani is a paradise for bird watchers and also has a wide range of species of flora for nature lovers. However, accommodation options are limited and one might have to plan their stay elsewhere.
6) Durgadevi:
This zone is closed to tourists during the monsoon months but has so much to offer during the rest of the year. Visitors can spot the Ramganga and the Mandal rivers crossing over at several places across the zone, allowing for a tranquil and relaxing setting. Access to Durgadevi is from the Durgadevi gate, which is the furthest away from Ramnagar (28 km) in comparison to other zones. However, said to have the most beautiful landscapes in all of Corbett, the distance is sure to be worth covering.
No matter when and where you decide to plan your stay, it is advisable to book your accommodation well in advance, as early as 45 days before your holiday, as most lodges and guest houses tend to get full. That being said, Corbett is bound to be etched in your memory for a life-time!

India's most famous national park, the Jim Corbett National Park is well known as a tiger heaven and spans over 520km.sq. Located in Uttarakhand with the Sub-Himalayan ranges creating a natural barrier to the north, the park is home to over 600 species of birds, 110 species of trees, 50 species of mammals and 25 species of reptiles. The park is split into 5 distinct zones - Bijrani, Jhirna, Durgadevi, Dhela and Dhikala (Sitabani, while not a part of the official National Park, is considered another tourist zone) - from where you will be able to explore the natural beauty that is Corbett National Park.

How Do I Get There?

When's The Best Time To Visit?

Corbett is an all-year round experience, but the the division of the region into 5 safari zones in recent times has been a strict measure to maintain the natural beauty and isolation of the park and its residents. Based on which zone you wish to visit, plan your travel accordingly.
The core area (Dhikala Zone) as well as the Durga Devi Zone are open only from November 15th to June 15th and remain closed during monsoons. The Jhirna and Sitabani zones are open all throughout the year and can be visited any time. The Bijrani Zone is open only from October to June.

How To Get Around?

A 4x4 is the perfect way to get around; either hire one with a driver (recommended) or rent one out yourself. Apart from open jeeps, the only other way to get around within Corbett is by taxi.

What are the different zones in the region?

As mentioned before, the Jim Corbett National Park is divided into distinct sections, within which there are certain "buffer zones" or tourist spots. Each section is famous for a their different flora-fauna offerings.
Bijrani Safari Zone: One of the most visited zones in the park, the Bijrani Zone is made up of expansive grasslands that go on for miles, giving you an unfettered and uninterrupted view of all that the jungle has to offer. During migrations or just simple changes in habitat, animals - tigers, elephants, deers (specifically, and of all types) and more have to cross this open space, making it perfect for animal spotting.
Jhirna Safari Zone: Jhirna village - at the southern end of the reserve - was one of the first to be resettled under the park project. Now a dense jungle housing most, if not all of the parks 600+ animal species, is a must visit for those looking to spot animals in the gritty tenseness of the jungle; it also remains a great place for birdwatching.
Dhela Safari Zone: A relatively new zone, the Dhela zone is an eco-tourism zone that gives you another shot at catching a glance at the elusive tiger. A limited number of Gypsies will take you into the zone for a tour on a predetermined route, so bookings must be made in advance. In fact for anyone really determined to see a tiger, the Corbett Park guarantees that at least one tiger sighting will take place on your visit to Dhela.
Dhikala Zone: The most famous zone in all of Corbett, Dhikala is located on the edge of the Patli Dun Valley along which a variety of tributaries of the Ramganga flow. With a beautiful panoramic view of the entirety of the park and sky, the "last grassland in Corbett" is a must.
Durga Devi Zone: On the NE side of the reserve the Durga Devi Zone is famous for elephant sightings and fishing. Surrounded by thick, green forests and the Ramganga and Mandal rivers flowing through it, the Durga Devi Zone is as magnificent as it is pleasant.
Sitabani Buffer Zone: Not exactly a part of the reserve, the Sitabani Buffer Zone is maintained by the ASI (Archeological Survey of India). Open all year round and with no limits on the number of vehicles allowed, Sitabani is a great place for bird/animal watching, fishing and spiritual rejuvenation; courtesy of the Siva temple present there.

What Are The Attractions & Things To Do?

Corbett National Park takes up the entirety of your experience in the region. Each zone is distinct in the species of flora and fauna it holds and so the safaris to each of them is important - and time consuming. But if you are tired of sitting in a caged vehicle spotting a royal Bengal Tiger passing through the woods, or watching a hardworking Hornbill build its nest, or see a herd of majestic Indian Elephants making their way across the plains, then you should visit one of these three important - yet peripheral sites in the region:
Corbett Falls: A picnic spot, Corbett Falls is 4km from Ramnagar Road. Families and couples looking to enjoy themselves in mother nature's lap find themselves here. Surrounded by the dense jungle, the spot had always held a rapture like control over those who visited, but over the years it has been developed into a true picnic spot by the tourism board.
Garjiya Devi Temple: A temple presided by Garjiya Devi, said to be an incarnation of Goddess Parvati, this temple is one of the many powerful Shakti temples spread all across India. Located in Ramnagar, the temple is a serene visit; calm, peaceful.
Corbett Museum: A small heritage sight that is dedicated to Jim Corbett, the founder of the park, the Corbett Museum is located by the park in Kaladhungi. The little ones will enjoy this visit as the museum has put up his belongings for viewing - manuscripts, guns, nets, diaries, sketches and more.

Corbett is flush with a variety of cheap, mid-range restaurants that serve cuisines from all over - Indian, Mediterranean, Asian and so on. It is just a matter for what mood you are in. We recommend these top rated restaurants in the area.
2000+Handpicked getaways
300+ Holiday Destinations
1000+Group Outings
In the
News